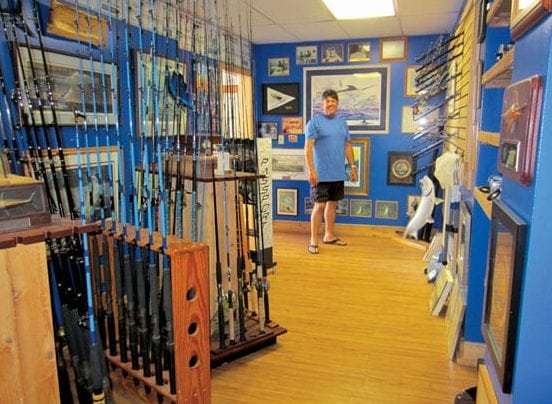 Have a look at this profile on our Founder and Lead Broker, Captain Randy Towe, on All at Sea!

Thanks to Jill Borski for interviewing and writing this feature!

Randy Towe of Islamorada is a fishing guide, rod builder and yacht broker. A man of many talents, he had two main loves growing up in South Florida: baseball and fishing. He pursued them concurrently, wondering what his future might hold. Now, his skills and experiences are enabling new opportunities.

As a lad, Towe came to fishing naturally enough. His mother worked as a switchboard operator for Southern Bell, down the street from Bill Boyd’s Bait and Tackle in Fort Lauderdale. In 1973, Towe asked his single mom for a custom rod he saw at Bill’s, which cost $200. She told her son, I’ll buy you the parts. So, at age 10, he built his own rod. “It became a way for me to stay off the streets,” Towe said. “I began making rods in my bedroom.”

Towe opened Pelagic Walkaround Yachts in the same building using another one of his unique experiences as an opening to sell pre-owned walkaround boats. In 2002, Towe had built his own version of this boat, a 43-footer now named the SkipJac. “It was the first walkaround-flybridge sportfisherman,” said Towe.

He appreciated that the flybridge created more space for fishing, and gave the captain more space as well as enabling him a better view of the water. The safety of accessing the bow — without straddling the forward structure with or without guardrails — was another asset of the 360-degree walkaround design. Towe’s vision back then was to design and sell that style of boat, but the economic recession hit and he chalked up his creation to learning from experience.

Read the full article on AllatSea.net