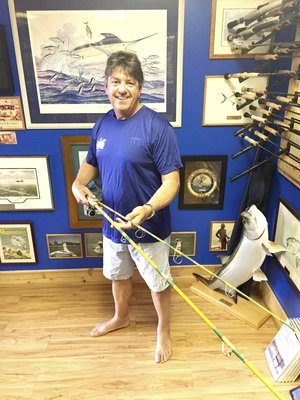 Have a look at this article about the re-invention of Pelagic Walkaround Yachts on KeysNews.com!

TAVERNIER — Florida Keys fishing guide and custom-rod builder Randy Towe has his sights set on a new horizon as a yacht broker.

The first step will be handling sales of pre-owned walkaround boats, a style Towe favors.

“This is a niche market. I’m not going to compete with the big yacht brokers,” he said. “I want to keep it specialized, so I can provide better customer service.”

A walkaround boat essentially is described as a center-console boat large enough to accommodate a forward berth and head, or even multiple staterooms. Walkways inside the gunwales provide access to the bow.

“You see a lot more walkarounds on the water now,” Towe said. “I can help the owners sell their walkaround and maybe help them move into something bigger, working as a liaison with manufacturers.”

Something big ultimately is what he has in mind: plans for a 62-foot, walkaround-flybridge sportfishing yacht with staterooms and state-of-the-art accessories and gear.

Towe knows it can be done, he said, because in 2002 he built a boat that could foreshadow an updated version.

“It was the first walkaround-flybridge sportfisherman,” he said. “This design did not exist until we built it. At the time, there were only a few walkaround models and none of them had a flybridge.”

Adding a flybridge creates more space for fishing, gives the captain more room to work and lets him keep a better eye on the water, Towe said. Towe’s first walkaround-flybridge boat, under new ownership, still runs out of a Broward County marina.

“Our vision in 2002 was to design and sell that style of boat. That was always the intention,” he said. “Then the recession happened. Fast forward 16 years and still no one made a flybridge walkaround, except for that first boat. The people who own it understand the maneuverability and safety it provides.”

A new version, with some features of an express-style boat, can take advantage of major advances made in marine design and gear since 2002, Towe said.

“The new boat will take all of the changes in technology and everything I’ve learned about about in the last 16 years. It will be a different boat,” he said.

Planning the design remains a work in progress. Building a boat that could sell for about $5 million would take more than a year.

Read the full article on KeysNews.com